The Great British Summer of Sport games have landed 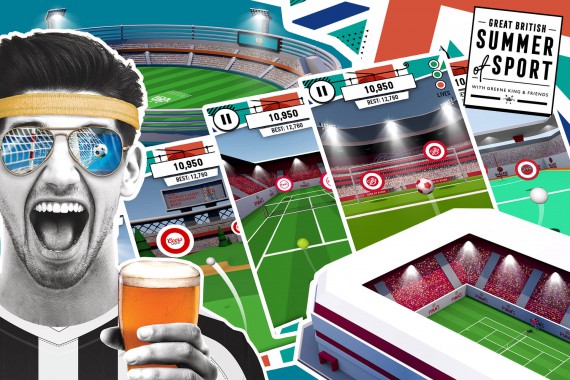 Our content arm, Trunk, has added yet another stellar name to its growing client list by partnering with Greene King to collaborate on the pub company’s Great British Summer of Sport campaign.

Greene King wanted to engage with customers through its Season Ticket loyalty app in order to drive footfall to pubs during key sporting events this summer.

Trunk developed five mini games, sponsored by Coke Zero and Schweppes, that customers can play in the app to win a variety of different prizes including free drinks, gig tickets, a holiday worth £5,000 and tickets to major sporting events.

Each game was made in association with a different drinks brand including Greene King IPA, Budweiser, Bacardi, Pimm’s and Coors Light. The campaign has already seen strong customer engagement and Greene King believe this will continue throughout the summer.

To support the campaign Trunk created a number of promotional videos including one featuring football freestyler’s Charlotte Lade and Dan Magness. Charlotte, who was born in Norway, is part of the Norwegian Street football team and performed at the 2013 Champions League final at Wembley. Dan currently holds the world record for the longest keepie-uppie, keeping a ball aloft for 26 hours using just his feet, legs, shoulders and head. The videos have been used across Greene King’s website and social channels to promote the Great British Summer of Sport activity.

Chris James, our Head of Partnerships at Trunk, said:

“We’re extremely proud to be working with a brand of Greene King’s stature. From the moment we first met with the Sports Marketing team we were excited about the potential of the Great British Summer of Sport campaign. The team has produced highly engaging pieces of content that align with Greene King’s objectives. We look forward to continuing our relationship with them and working on future projects together.”

“We’ve been aware of the excellent work Trunk produce for some time and I’m excited to be working on our first project together. The team has been instrumental in bringing our ideas to life and their vision has helped us to engage with our core audience across film and creative technology. We’re already seeing some fantastic results from the campaign and I have no doubt this is the beginning of a strong relationship between Greene King and Trunk.”